The dream lives on. Latin American music, culture, politics & the spirit of Victor Jara in Wales.

We are a group of people based around the town of Machynlleth situated in the Dyfi Valley of Mid Wales. The roots of our inspiration come from the life music and example of Victor Jara. This visionary musician and theatre director was part of the New Song movement in Salvador Allende’s Chile.

Following the success of the 3-day El Sueño Existe politics and arts festivals dedicated to Victor Jara which have been taking place in Machynlleth every two years since 2005, we are continuing to develop opportunities and ideas for cultural expression, social justice and human rights.

Read the mission statement of our festival here

An inspirational quote from Francisco Dominguez, national secretary of Venezuela Solidarity Campaign, who is also a Chilean exile, academic & activist supportive of our festival:

“In all my many years as an activist in Britain, I have found that one of the most beautiful gestures and commitment with Latin America’s struggles is the El Sueño Existe – Victor Jara Festival, Machynlleth, in the depths of marvellous West Wales. Organised to celebrate the worldview and music of Chilean singer, Victor Jara, to tell the world that his dream, our dream, of a better world goes on, still over four decades after his assassination by Chilean fascism Don’t miss this unique festival.

El Sueno Existe is cultural and political solidarity at its very best.”

In 1976, a group of Chileans in exile painted a mural on a student common room wall in the Leeds University Union building. Later hidden behind a temporary ceiling and kitchen wall, the mural was finally uncovered in 2017.

A recreated cloth version of this banner was unveiled at the El Sueño Existe Festival 2019!

Listen to an interview from The World Tonight on BBC Radio 4 with Tony Corden (founder of the El Sueño Existe festival) about Victor Jara’s murderers being at last brought to justice, recorded in summer of 2018.

A clip of our friend Valentina creating a charcoal drawing of Victor Jara. … Click Here 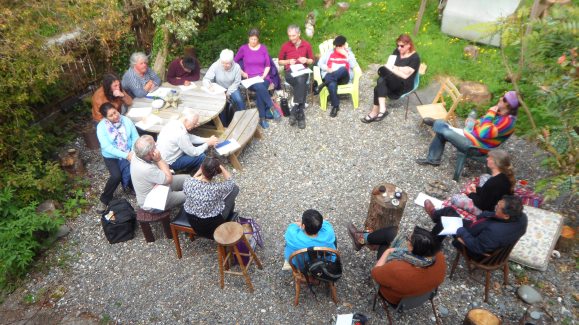 Thank you to our funders